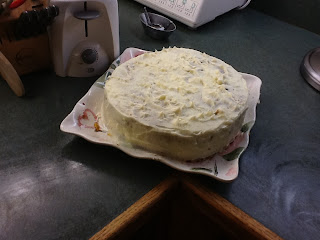 Soo, when I first saw this recipe, I laughed.  Mmmm, kay. Sweet potato? Like yams or sweet potato fries? Isn't that the anti-sweet? But, in my quest I wanted and in fact needed to try it. And, was more than pleasantly surprised.  I took a first, hesitant, bite and the spices and flavor burst in my mouth. I don't like pumpkin pie.  The texture is funky. However, this was like a Thanksgiving pumpkin pie that was spilling over with flavor minus the baby food texture.  I definetely want to make it again, but try it as a pie instead of a cake.  The frosting was a little funky because it was white chocolate mixed with cream.  In pie form, I will drizzle it with white chocolate and leave out the nuts.  Delish! 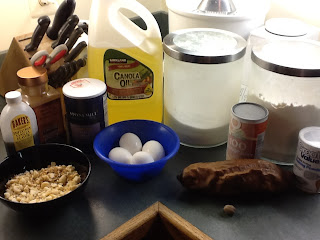 2 lb (about 3) Sweet potatoes (I had three big sweet potatoes and it was WAY to much. Go for 2 big ones or 3 small ones)

1 1/4 C Vegetable oil
Unsalted butter, for pans
2 C Cake flour, (not self-rising), plus more for pans
4 Large eggs
2 C Sugar
2 tsp Baking powder
1 tsp Salt
1 Tbs ground Cinnamon
1 tsp ground Nutmeg
2 tsp pure Vanilla extract
3 Tbs Brandy (or equal amounts of fruit juice.  I used orange.)
1 1/2 C unsalted Macadamia nuts, toasted, coarsely chopped
1 lb White chocolate
2 C Heavy cream
Heat oven to 400 degrees. Coat potatoes with 1/4 cup vegetable oil, and place on baking sheet. Bake until tender, 30 to 40 minutes. When cool enough to handle, remove skin, and mash flesh with a fork into coarse puree.
Lower oven temperature to 325 degrees. Butter two 8-by-1 1/2-inch round cake pans (I'm not sure where they are coming from but I used one 10 inch springform pan and it FILLED the whole thing.  This makes a big cake), dust with flour, and set aside. In the bowl of an electric mixer fitted with the paddle attachment, beat eggs and sugar together on medium-high speed until light and fluffy, about 5 minutes. Add remaining 1 cup vegetable oil; beat on medium speed until well combined. Add the cooled sweet potatoes; mix until combined.
Sift together cake flour, baking powder, salt, cinnamon, and nutmeg; mix into sweet potato mixture. Mix in vanilla and brandy (or fruit juice) until combined. Remove batter from mixer; fold in 1 cup macadamia nuts by hand.
Evenly distribute cake batter into prepared pans, and transfer to the oven. Bake until a toothpick inserted into center comes out clean, 40 to 45 minutes. Let pans cool on a wire rack 10 minutes. Invert cakes onto rack; cool completely, about 1 1/4 hours.
Meanwhile, chop white chocolate into small pieces; set aside. Bring 1 cup cream to a boil; pour over chocolate, whisking until chocolate is melted. Chill for 30 to 40 minutes.
When chocolate mixture has cooled, pour remaining cup cream into an electric mixer; whip on medium until soft peaks form, about 3 minutes. Fold whipped cream into chocolate mixture until fully incorporated.
Cut each cake layer in half horizontally, creating four layers. Spread 2/3 cup chocolate frosting on one layer, then stack next layer on top, and frost. Repeat frosting-and-stacking process until each layer is frosted. Spread remaining frosting on sides and top of cake. Arrange remaining 1/2 cup macadamia nuts on top of cake, and serve. 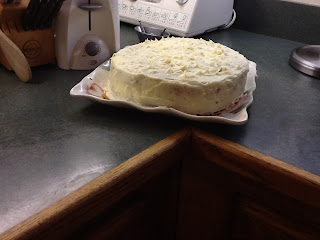 Rach's Notes:
This cake is really yummy.  I had serious doubts but it was delicious!  I highly recommend it and am excited to try it in pie form.
﻿