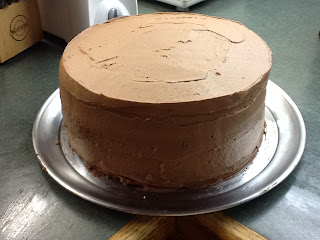 This cake was DISAPPOINTING with a capital "D."  Maybe it was the fact that there was 11 egg whites in this cake that made me think "this better be good."  The cake was dense and tasteless.  I used a buttercream instead of the fudge frosting the recipe originally called for, and I am so glad.  I wouldn't have been able to lift it if I had used the fudge frosting.  The cake was heavy and dense.  It might, and emphasize might, be good for a strawberry short cake. 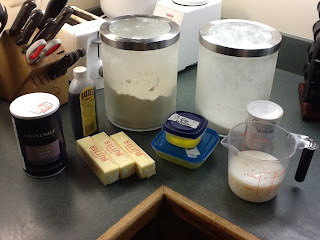 Heat the oven to 350 degrees. Butter and flour two 8-by-3-inch cake pans (I used 9x2). In the bowl of an electric mixer fitted with the paddle attachment, on medium speed, cream together butter, sugar, and vanilla until light and fluffy, about 3 minutes.

Sift together flour and baking powder. With the mixer set on low speed, add the dry ingredients to the butter mixture, alternating with milk, starting and ending with flour; scrape down sides twice.

In the bowl of an electric mixer fitted with the whisk attachment, whisk egg whites with pinch of salt on high speed until stiff peaks form, 3 to 5 minutes. Whisk in a large spoonful of the beaten whites into the batter to lighten the mixture. Fold the lightened batter into the remaining egg whites. Divide the batter equally among the prepared pans. Bake until golden brown and a cake tester inserted into the center comes clean, about 1 hour 5 minutes. Remove the pans to a rack to cool for 5 minutes. Invert cakes onto wire rack to cool completely.

If cakes are not level, use a serrated knife to trim tops off. Carefully slice each cake horizontally into three equal layers, about 3/4 inch thick. (You will have six layers.) (I just cut it in half horizontally). To assemble, place one sliced layer on an 8-inch cardboard cake round. Spread with 1/2 cup frosting. Repeat with remaining layers, placing the final layer bottom side up. Cover cake with remaining frosting. Serve immediately. 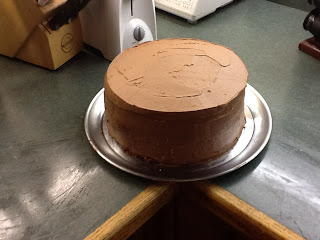 This cake was not my favorite.  Instead of spongey and light the cake was dense and not taste-ful. I can't recommend making this.  It would be cheaper and taste better to make a pound cake or buy one at the store.  Very NOT good.

Just a simple cake, but can make ranking 1 that's great..