Maple Layer Cake
Cupcake Ranking: 1 Maybe (and that is generous) 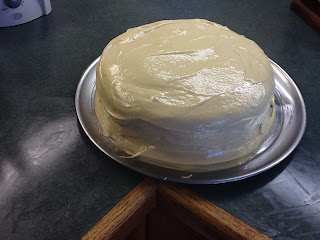 This is one of those recipes where you think, "Hmmm.  Maybe." And then you really hope that it is good because it would be fun to have a great cake made primarily of maple syrup.  Admittedly, after the cake baked, the whole house smelt like pancakes and syrup taste.  Hmm, Maybe...Alas, no.  Not only no, but not.  ever. again.  We each had a piece and threw the rest of the cake away.  Gasp. 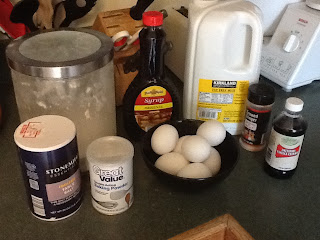 Ingredients
8 Tbs (1 stick) unsalted Butter, room temperature, plus more for pans
2 3/4 C all-purpose Flour, sifted, plus more for pans
2 C pure Maple syrup, preferably grade A dark amber
3 large Eggs
1 Tbs Baking powder
1/4 tsp Salt
1 tsp ground Ginger
1 C Milk
1 tsp pure Vanilla extract
Maple Buttercream Frosting
6 Large Egg Yolks
2 C Maple Syrup
1 lb (4 sticks) Butter
Preheat the oven to 350 degrees. Butter two 9-by-2-inch round cake pans, and dust with flour. Tap out any excess flour, and set pans aside.
In the bowl of an electric mixer fitted with the paddle attachment, beat the butter until creamy. Add the maple syrup, and beat until combined. Add the eggs, and beat until combined.
In a large bowl, sift together the flour, baking powder, salt, and ginger. Add the flour mixture to the butter mixture, and beat to combine. Beat in the milk and vanilla extract until combined. Stir in 3/4 cup chopped walnuts.
Divide batter between the two prepared pans. Bake until golden and a cake tester inserted into the centers comes out clean, about 40 minutes; rotate the cake pans halfway through baking time to ensure even baking. Transfer pans to a wire rack to cool.
In the bowl of an electric mixer fitted with the whisk attachment, beat egg yolks on high speed until light and fluffy, about 5 minutes.
Meanwhile, pour maple syrup into a medium saucepan. Place pan over medium-high heat; bring syrup to a boil. Cook syrup until a candy thermometer registers 240 degrees (just above soft-ball stage), about 15 minutes.
Remove the saucepan from the heat. While the electric mixer is running, pour the syrup in a slow, steady stream down the side of the mixing bowl into the egg-yolk mixture (it is essential that the syrup touches the side of the bowl as you pour it in so the sugar will be very evenly incorporated and not splatter onto the sides of the bowl) until the syrup has been completely incorporated, about 1 1/2 minutes. Beat until the bowl is just slightly warm to the touch, 5 to 6 minutes.
Add butter, one piece at a time, until all of it has been completely incorporated and the frosting is fluffy, about 4 minutes more. (I would refrigerate it first.  At least until it was frosting consistency.  Mine was runny and was sliding off of the cake.) Use immediately.
Turn out cakes, and place one, top-side up, on a cake stand or platter. Spread 1 1/2 cups maple buttercream frosting evenly over the top. Place the second cake layer on top, and spread the remaining 2 1/2 cups frosting around the sides and over the top.
Rach's Tips
This cake was a major disappointment.  The cake was super dense (and tasteless) and then the frosting tasted like maple flavored butter.  The frosting would have been great on a fried scone, but on a cake, in my daughter's words, "was not my fav-a-rite."  The cake just did not taste good and the texture was hard to swallow.  I will never make it again.
﻿
﻿