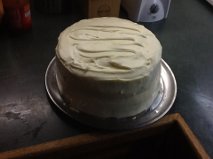 This cake sounds like one thing and tastes like another.  The apple spice part I got, but there really isn't a caramel taste.  At. All.  The recipe calls for two 8 inch cake pans.  I used my 9 inch because that is what I have, and woe Nelly am I glad.  I had two huge layers plus four muffins.  Which brings me to the major revelation about this cake.  As a muffin, they are delicious, dense and super breakfasty.  Not so delicious as a cake.  The recipe also called for a brown sugar meringue.  I have done that before and it tastes like whipped butter.  Umm, I love butter as much as the next fan, but not spread on a cake.  Anyway, I used a cream cheese frosting and the cake was good, but I don't think I will make it again (as a cake).

*On a side note, after I posted this I gave the cake to a group of people and they raved about it.  So, apparently other people really loved this.  Take it as you will. 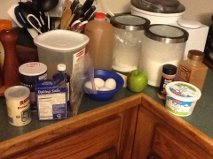 Put 1/2 stick butter into a large nonstick skillet. Using the tip of a paring knife, scrape seeds from vanilla bean into skillet, and toss in pod. Cook over medium heat until butter is lightly browned, about 2 minutes. Stir in apples, cider, and 1 cup granulated sugar. Raise heat to medium-high, and cook, stirring occasionally, for 8 minutes. Reduce heat to low, and cook until apples are golden and translucent and liquid has evaporated, about 10 minutes. Discard vanilla pod. Let cool.

Preheat oven to 350 degrees. Butter two 9-by-2-inch round cake pans. Dust with flour, and tap out excess. Whisk together flour, baking powder, baking soda, salt, and spices. Reserve 1/4 cup flour mixture.
Beat remaining 2 sticks butter, remaining 1 1/2 cups granulated sugar, and the brown sugar with a mixer on medium-high speed until pale and fluffy, about 5 minutes. Reduce speed to medium, and add eggs, 1 at a time, beating well after each addition. Reduce speed to low. Beat in flour mixture in 2 batches, alternating with the sour cream and scraping bowl as needed. Add remaining 1/4 cup flour mixture to apple mixture, and toss. Fold in apple mixture and pecans (if using).

Divide batter between prepared pans (because of the amount of batter I filled two 9 inch pans plus 4 muffins). Bake until tops are dark golden brown and a toothpick inserted into centers comes out clean, 45 minutes. Let cool for 30 minutes on a wire rack. Run a knife around edges of cakes to loosen. Unmold cakes, and let cool, right side up, on rack. (Cakes can be wrapped in plastic and refrigerated for up to 3 days.)

Place 1 cake, cut side up, on a cake stand. Spread 1 1/2 cups icing over top. Place remaining cake on top. Spread icing over entire cake. Refrigerate until firm, about 45 minutes. 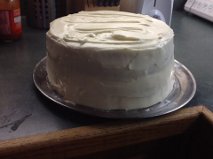 As I said before this cake was okay but better as muffins.  It was interesting because the cake had a kind of raisin-ey taste.  No raisins.  This is an old fashioned taste that really brought back memories from cakes my Grandma made when I was a kid.  The cake was moist and very flavorful but as a piece of cake the taste was too much.