This cake is the sole reason behind my cake quest.  I love spice cakes and was super excited for it.  The cake itself didn't disappoint.  I think because it is an old fashioned cake recipe it is delightfully simple.  Simple ingredients, simple techniques and a glorious baked smell.  For some reason my Great Grandma Gladys was in my heart and on my mind while making this cake.  After I sneaked a taste before frosting it, child hood memories came flooding back to me along with her warm spirit. 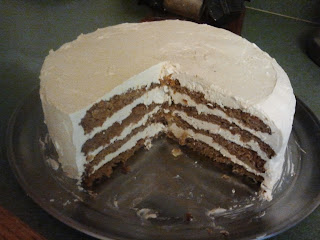 Then I frosted it and my like button turned to dislike and I was frustratingly disappointed.  But I digress, Here's what it took. 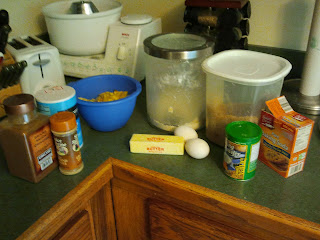 For the Frosting
4 Large egg whites

Bake until a toothpick inserted in center of cake comes out clean, 35 to 40 minutes. Cool cakes in pans 20 minutes, then invert onto wire racks; peel off parchment. Invert cakes again, and let cool completely on racks.

Make buttercream: In a heatproof bowl set over (not in) a pan of simmering water, whisk together egg whites, sugar, and salt until sugar has dissolved; remove from heat. Using an electric mixer on medium, beat mixture until fluffy and cooled, about 15 minutes. Increase to high; beat until stiff peaks form. Reduce to medium-low; gradually add butter, beating until fully incorporated, about 3 to 5 minutes.
Assemble cake: Place one layer on a serving plate; spread top with buttercream. Top with another layer; spread top with buttercream. Top with third layer; spread remaining buttercream over top and sides of cake. Refrigerate at least 1 hour (or up to 4 days). To serve, bring cake to room temperature; slice with a serrated knife. 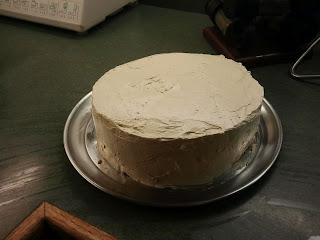 The cake is truly delicious, moist, aromatic, and has an old fashioned taste.  I WOULD NOT use the frosting again.  It tastes like butter.  Nothing else, just butter.  It literally tasted like I frosted the cake with a stick o' butter.  We peeled the frosting off and ate the cake.  A cream cheese frosting or even just a vanilla frosting would be delicious.

I also wouldn't divide the cake layers again.  The reason they used three cake pans is that because the cake is super moist it falls apart easily.  Two pans would be great, look nice and taste yummy.

Thus far the frostings from the various cakes have been really disappointing.  Unless the frosting recipe looks like it would be lip smacking good, I'm going my own route and making my own frosting recipe.  Whoever compiled this list is obsessed with egg white frosting.  Why?  Who knows.  But, all in the puruit of greatness right??